Imagine having to install an IP camera outside of your home. Placing a camera with a network cable is easy enough; however, getting power to an area without any sockets can be daunting. Power over Ethernet eliminates this problem by allowing you to draw electrical currents through the Ethernet cable. In this blog we will discuss what is Power over Ethernet, how it works, and why it is beneficial.

How Does it Work? 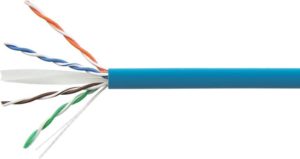 Just as the name suggests Power over Ethernet is a technology that allows a device to be powered with a network cable. These network cables are often Cat 5e or Cat 6 Ethernet cables. Inside these cables are eight wires that are arranged as four twisted pairs. Two of these pairs are used for sending data, while the other two pairs are unused and are called spare pairs. The electrical current goes through the Ethernet cord using each pair as a single conductor. Then it can use either of the other two data pairs or two spare pairs to carry the electrical current. Power over Ethernet goes through the cable at a voltage around 44 and 57 DC.

An endspan device, also known as an endpoint, is typically a network switch. There is no need for any other power source. 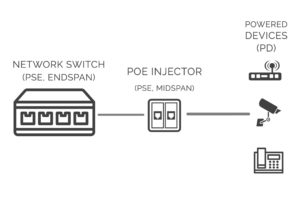 What are the Advantages?

There are many advantages to using Power over Ethernet. From installation flexibility to cost benefits, PoE is a great way to install network devices. You will not need an electrician to install a new outlet nor will you have to purchase any extra cables. Using PoE technology will save you time and money. Without the need for electrical outlets you have flexibility to install a PoE device nearly anywhere you would like. Without extra cords and cables there is less clutter while minimizing points of failure.

PoE is an emerging technology that is useful and beneficial by limiting clutter and allowing energy to an area that may not be accessible otherwise. Advanced Integrated Controls uses PoE technology to benefit our clients needs. If you are interested in using Power over Ethernet for your home or office contact us today.