We’re seeing more and more 4K TVs in the presence of homes, especially within our clients’ homes. Soon enough, it’ll be the standard. 4K TV’s are making a mark in the consumer tech market with anticipation for growth in the future. According to recent findings by IHS Markit Data, 4K TVs now represent over 44% of all displays sold.

If you’re looking to buy a new TV, but don’t know whether to upgrade and treat yourself to a 4K TV or 8K TV or play it safe and purchase a 1080 TV, keep reading to figure out which one is best for you.

Let’s start with 1080 TVs since we’re the most familiar with them. People know how to use and navigate 1080; they are predictable and reliable. Virtually everything streams in 1080. These have been out for a while and are considered the industry “standard.” Soon enough, 4K TVs will replace 1080, but we still have a long ways to go. First things first, pixels.  A 1080 TV has 1080 rows(hence 1080) and 1920 columns of pixels. Since these have been out for a while, this is the best TV if you’re on a budget, they are ridiculously budget-friendly. Companies are still rolling out these TVs and the newer ones have the same smart features as a 4K TV. And if they don’t, you buy a streaming stick for less than $30 and it’ll still be cheaper than buying a 4K TV. While this option is great for those who want to save on a sufficient TV, this is also preferential for those of you that are more simple and not so much tech-savvy. For example, if you don’t want to have to log in to a million accounts, or just prefer cable TV, this is a great option. Plus, mainly all major streaming services stream in 1080p by default and all major cable providers stream in 1080p or 720p by default. Even though there are gaming consoles that are 4K compatible, there aren’t a lot of games that support 4K yet, defeating the purpose.

A step up from 1080 with improvements in color and sharpness, we welcome the 4K TV. Pixel-wise, this TV has 2160 rows and 4096 columns of pixels. If you’re looking for a nice TV and don’t have any low budgetary restrictions, this is the TV to get today. Since there are four times as many pixels as 1080, you can have closer viewing of a clearer picture without straining your eyes. Most 4K TVs are either OLED or HDR which is the best picture quality you can get right now. Companies are gravitating towards the new wave towards 4K. Video streaming services like Netflix, Hulu, and Youtube are adding more and more 4K content. TV streaming devices like Chomecast Ultra and Roku already have 4K and HDR support. Blu-ray players and gaming consoles like Sony and Xbox are 4K compatible now. When LG launched the first 4K OLED TV a few years back, it was on the market for a near $20,000. Can you believe it? That’s enough to buy a new car. But in recent years, prices have steadily dropped and they are quite affordable to the average consumer. The visual differences between the 4K and 1080 are hard to spot to the naked eye unless you’re purchasing a larger screen. So if you’re going to purchase a 4K TV, opt for a larger screen, 65”+. 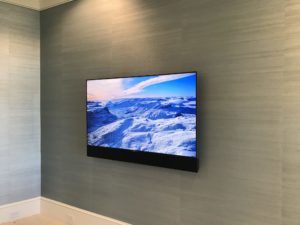 The latest and greatest innovation that just launched is the 8K TV. Amazing, but I’m waiting for the 32K. Kidding. Anyways, the 8K TV has 7680 columns with 4320 rows of pixels. Samsung has an 8K TV that you can get for roughly $12,000. Although much cheaper than the price of the 4K TV when it first came out, this is still ridiculously expensive for the average consumer to spend on a TV. Since this is brand new, there is not nearly as much 8K content as there is 4K and 1080 unless you’re in Japan. Heck, they are still integrating 4K content into a lot of devices and programs so it will be a long time before 8K content makes its way onto the screen. Since there isn’t much 8K content out there right now, your 8K TV will upscale 4K content. A drawback to the 8K is the extremely high bandwidth requirement. For 4K streaming, you’ll need at least 20Mbps, which is already high enough. Early tests have shown that 8K will require at least 50Mbps, which isn’t even an option for certain areas in the US. Also, it will burn through data; an hour of 8K streaming equates to 75.2 GB of data. The benefit of having an 8K Tv is sitting even closer to the screen. This is great for having a large screen in narrow spaces like a living room or office. If you’re thinking about buying an 8K TV, I would suggest purchasing a large one at that. I’m talking 75” and above. Anything smaller won’t be worth it because you won’t be able to tell the difference between the 4K and 8K. 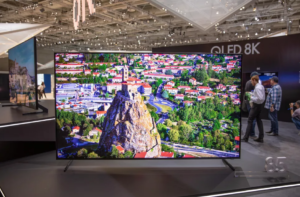 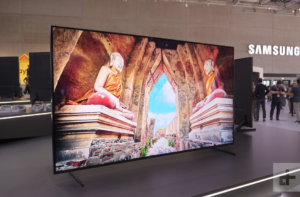