The Future of Advertisement: Augmented Reality

Earlier this year, Facebook announced that it would be offering an augmented reality feature for businesses to advertise their products in Messenger. For those of you who aren’t quite familiar with Augmented Reality(AR), it is basically a mixture of the real world and virtual reality (Think Snapchat filters!). With this feature, consumers can message a participating company on Facebook and an automatic message can be generated asking the user to open the camera through the Messenger app. Through the camera feature, consumers can use the augmented reality to virtually try out different products. ASUS, Kia, Nike and Sephora were the earliest partners of Facebook with this particular project while it was in the BETA phase. When the consumer goes to the Sephora page, for example, and opens messenger with them, there is an automatic prompt that says “Try on Looks”. When the user clicks this prompt, the camera is automatically opened and AR is used to let the consumer try out different shades of makeup on their face to see how it would really look. Similarly, Nike offers a feature that lets the user try on different shoes and see them from different angles.

Most recently, Facebook has upped it’s AR game by announcing the addition of this advertising feature to News Feed as well as messenger. So far, the only company having an AR add in the News Feed is Michael Kors. With this feature, you are able to easily try on any pair of Michael Kors sunglasses at the touch of a button. Other businesses such as Sephora, NYX Professional Makeup, Bobbi Brown, Pottery Barn, Wayfair, and King have signed on as partners for this project and should be featuring News Feed AR advertisements by the end of August. 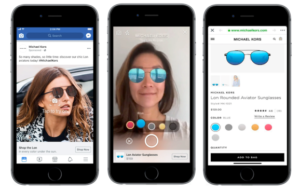 What does this mean?

This feature is a huge step towards the future of advertisement. Now, consumers can easily test out products without ever having to leave the comfort of their home. This is especially important considering the massive increase of online shopping that has occurred within the last decade. Within the next year, Augmented Reality Advertisement is likely to be seen by many more companies and through platforms other than just Facebook.