Just a few days ago Apple had some big news for the company introducing the 4th generation Apple TV, the iPad Pro, the new iPhone 6S and iPhone 6S Plus, and a little update about the Apple Watch.

The near 2.5 hour Apple event was packed with information and overloaded excitement. If you’re an existing Apple TV owner, then we’re sure you have a lot to say about the 4th generation Apple TV.

This is probably one of the most talked about launch from the Apple Event and it should be! Apple hasn’t done much with the Apply TV for a few years. Accept for the price drop back in March, which went from $99 to $69, but it needed more. There are also 2 different models to choose from; a 32 GB ($149) and a 64 GB ($199).

The new Apple TV is slightly thicker and a bit wider, but the connections are pretty much the same. They just got rid of the optical audio input. Which can be a disappointed because audio is now only sent over the HDMI cable along with the video. If you relied on the optical audio jack, you’re kind of stuck if you want to buy the new model. Unless you buy a splitter box that converts HDMI into HDMI and optical output.

Apple also upgraded the processor. It went from an A5 to an A8, same processor used for the iPhone 6 and 6 Plus. The new iPhone 6s and 6s Plus features an A9 processor. Plus, the upgraded 2GB of RAM is a big hit because it will improve video caching and offer better performance playing games and opening apps.

With that being said, big news for a lot of Apple TV fans, is the Apple TV App Store. Sort of like the App Store on iOS featuring games, productivity, etc, but it offers the Universal Purchase too. Meaning you can buy an app for all your iOS devices at once.

Apple calls out to gamers and game developers to take on the Xbox, Wii and PlayStation – obviously not an easy task! With the increase in processor speed, the storage, and extra RAM, it’ll be interesting to see what the Apple TV does in the gaming world. 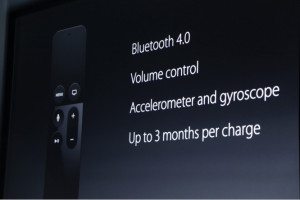 The Apple TV remote should shed some ease into the Apple TV gaming room too. It has actual buttons, glass touch surface at the top, and motion control support. Meaning just like the Wii remote, you can use it for games that require swinging for tennis and baseball. You don’t need line of site either.

Just like the RoKu, the Apple TV now has Universal Support. What does that mean? Well, you can now search a title and the results will pop from the iTunes Store, Apple Music Library, Netflix, HuLu, HBO, or Showtime. Just ask Siri to search for the latest movies or your favorite song (called Universal Search) and watch all the result pop up on your TV screen! Plus, the 4th generation Apple TV now runs on the iOS9, dubbed “TvOS”, which allows features like animated wallpapers and screensavers and whole lot more.

The only rumor that wasn’t added this round, was the internet TV service for $40. Apparently this is delayed till next year. We’ll see…

If you’re a local in the Bluffton or Hilton Head area, feel free to contact us to set up a home technology meeting. Comment below and tell us what your favorite new feature is on the Apple TV.