Mini-LED technology has been around for a few years, but mostly for commercial applications; however, this year the Mini-LED TV comes to the consumer market at an affordable price. Samsung and LG have both announced their own mini-LED televisions at CES2021. In this blog we will take a look at this emerging technology and why your next TV may be a mini-LED. 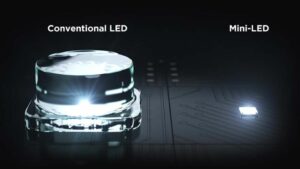 Within a Mini-LED TV are thousands of tiny light emitting diodes, also known as LEDs. The increased amount of LEDs within a television will drastically improve the overall image quality. By using smaller LEDs, manufactures can place more inside a TV display, allowing for finer control over highlights and shadows. This provides better contrast as well as an impeccable image quality. 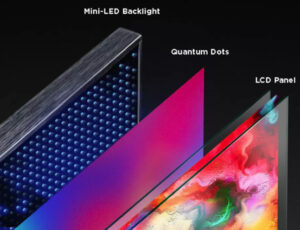 Mini-LED isn’t a brand new display technology, it is just a new type of back light. The picture is still created by a LCD display, while the mini-LEDs sit behind the display.

Previously, LCD displays were lit by fluorescent tubes behind the screen. As LED technology became available to the mass market, the fluorescent tube was replaced by LED. LED allowed for energy efficiency, thinner televisions and quicker power cycles.

Shortly after LEDs were introduced, the technology of local dimming became available and the arrays grew in complexity. Local dimming brought forth better contrast by allowing groups of LEDs to turn be turned down or even off in darkest areas of the TV picture. This improved picture quality greatly, and now with mini-LEDs local dimming has become even more advanced.

Overall the name for this technology is called mini-LED, yet television manufactures have came up with their own unique names. There are slight differences in how each company will implement mini-LED technology. Factors such as how many mini-LED lights and the placement will determine the differences in picture quality. 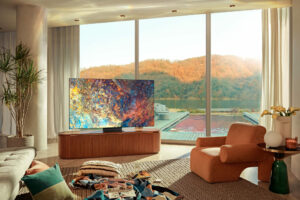 Samsung hasn’t confirmed the exact number of LEDs and dimming zones available in their Neo QLED series, however, there are a lot of new functions to be excited about. For the 2021 lineup the Neo QLED 8K and 4K models offer AI and smart features that expand the role of the traditional television.

The powerful Neo Quantum Processor has enhanced up-scaling capabilities. This processor uses up to 16 different neural network models and each are trained in AI up-scaling and deep learning technology. Picture quality can be up-scaled to 4K and 8K output regardless of the input quality. 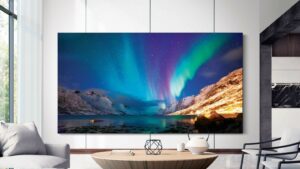 The Neo LED features a new Infinity One Design, which leaves the screen nearly bezel-less and provides an even more immersive viewing experience. Object Tracking Sound Pro allows for dynamic sound corresponds to the movement of objects on the screen, while SpaceFit Sound analyzes the installed TV’s physical environment and outputs to tailor an immersive sound specifically to your space.

Super Ultrawide GameView allows gamers to play not only at the wide 21:9 aspect ratio, but also an ultra-wide 32:9 ratio. This wider field of view ensures you won’t miss a thing. Game Bar gives players a new way to quickly monitor and adjust critical aspects of their game, easily switch aspect ratios, check input lag, or connect a headset easily.

Perhaps a simple, but clever addition to this new series is the solar cell remote control.  Samsung’s new remotes can be recharged by indoor light, outdoor light or USB. This is the first of its kind innovation from Samsung and it will help prevent waste from a projected 99 million AAA batteries over seven years. 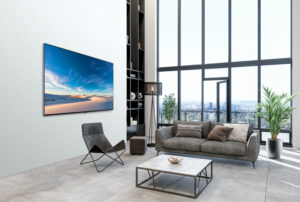 LG’s QNED televisions will be made up of nearly 30,000 mini-LEDs and have 2,500 dimming zones. This gives the QNED series a 1,000,000:1 contrast ratio with an incredible peak brightness. The contrast and brightness control is strikingly similar to the OLED panels. The QNED is LG’s best LCD when it comes to contrast, dynamic HDR and improved color accuracy.

Quantum NanoCell Color Technology provides a stunning picture with the power of both NanoCell Plus and Quantum Dot. This combination improves the color reproduction for rich and accurate colors.

LG’s QNED has its own Game Optimizer to deliver smooth, lifelike game-play. Game Optimizer also places all of your game settings in one place. This allows for a smooth gaming experience.

The a9 Gen4 AI Processor 8K is a groundbreaking technology for LG. This processor uses deep-learning algorithms to analyze and optimize content. AI Picture Pro uses a vast database of visual data points that removes noise and optimizes picture quality.

AI Sound Pro identifies voices, effects and frequencies so it can then optimize the sound for a more immersive experience. A new Auto Volume Leveling feature helps maintain consistent voice levels across different types of content.

Should You Buy One? 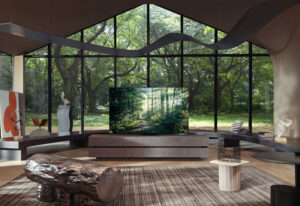 Its easy to say that both of these television models are incredible, but should you buy one?

Short answer, why not? If the OLED is still too steep of a price, then the mini-LEDs are the next best thing. They are more affordable and very comparable to an OLED experience. Mini-LEDs are closer to OLEDs in the black levels and color representation and are better with brightness. Another advantage is that OLEDs are prone to image retention, sometimes permanent screen burn, while mini-LEDs are not.

By the end of the year there should be a wide array of mini-LED televisions available on the market. If you are looking for an upgrade, contact us! Not only can we help you find the right television for your space, but we can also mount it and set up an incredible sound system for you. Whatever your entertainment needs are, AIC is here to connect you to the world.