WiFi 6, or 802.11ax, is the new WiFi standard expected to be released later this year. There are many new and notable features with the release of WiFi 6. The most important feature of WiFi 6 is the ability for it to handle more devices and network congestion.

WiFi 6 will also increase speed and help transmit WiFi signals more efficiency. It will boost streaming quality and improve latency. WiFi 6 will slash interference, especially with neighbors, and help your devices stay connected throughout your home with wider coverage.

Why Is WiFi 6 Better? 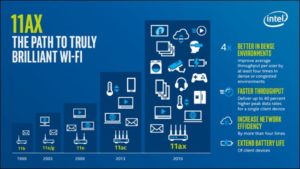 Its Going to be Faster

Yes, WiFi 6 is going to be faster, but we are not sure exactly how fast it is going to be yet. Theoretically, WiFi 6 will be around 9-10 GBPS, where our current standard 802.11ac (WiFi 5) is at 3.5 GBPS. This doesn’t mean you will be getting the whole 10 GBPS. What it will do is help devices share the network better, promoting faster speeds with more connected devices. In fact a lot of the excitement around WiFi 6 really isn’t the speed, but the way it will improve the network when more devices are connected to it. Whenever there are a lot of devices connected to one network, it takes a toll on it, causing the network to creep and slow down. WiFi 6 is going to address this problem with upgraded technology. 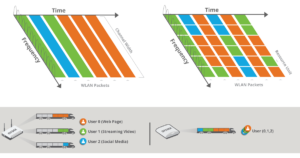 OFDMA, or Orthagonal Frequency Division Multiple Access, is a complicated term for a revolutionary new way your router is going to work.  OFDMA allows multiple devices to divide each WiFi channel into smaller sub-channels. From these sub-channels OFDMA allocates a channel to a single user or it may partition the channel to service multiple devices at once. The older version, OFDM, was not able to partition a  channel to serve multiple devices. Each device would have to wait its turn to transmit data. With OFDMA there is no more waiting for data to be transferred, since it can be partitioned and scheduled. This allows more devices on a network and improves the data transmission between them.

Multi-user – Multiple input/ Multiple output, or MU-MIMO, is the next evolution of the current MIMO. MU-MIMO helps multiple users on multiple devices access the network at the same time by relieving congestion. Think of it like this: 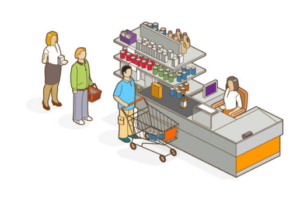 You are at the grocery store. There is only one register open and the line is four deep. The first person that came gets helped while the rest in line wait for service. With MU-MIMO three more cashiers walk up and now there are four registers open for four people to check out. Everyone gets served at the same time!

Your devices are no longer going to have to constantly search for your router’s signal anymore. Instead the device can save a lot of battery life in sleep mode by negotiating when it will send and receive data with the router. This also helps prevent conflict and overlap between devices on the same network.

When Can I Start Using it? 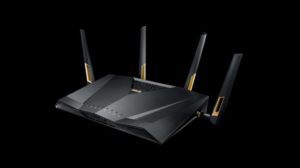 Certification of WiFi 6 products began in September 2019. New phones, such as the latest iPhone 11, have the technology inside them to utilize WiFi 6. It is going to be some time until WiFi 6 becomes integrated into our homes and businesses because your devices need to be able to support the new standard. WiFi 6 is an upgrade for your devices and routers, not your internet service. If you already have slow internet service, WiFi 6 is not going to fix it. Check out our blog about WiFi speeds to learn more about what causes slow connection speeds. In the meantime new devices will work with older routers. Expect to see a full roll out of new routers and WiFi 6 devices by next year.